ENSURING POWER WHEN AND WHERE YOU NEED IT

As much as we’d like to be able to just step outside the door and perform our work (especially on cold, snowy days), the fact of the matter is that most of the time we have to go to wherever the work is — and in some cases, that is in remote locations or locations where there is no power access.

Meeting on-site power requirements is critical to your performance on the job site. Wagner Power Systems has the solutions to your urgent and planned power rental needs, no matter the size of your project. Wagner Equipment Co offers rental power for your needs, from electrical power generators to air compressor rentals. Contact one of our Cat dealers in Colorado, New Mexico, or far west Texas to get started today! 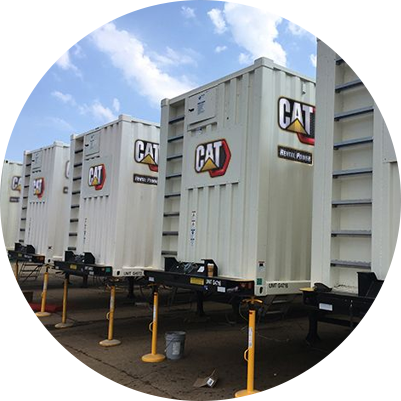 Simply put, a generator is a device that takes mechanical energy and converts it into electrical power that we can then use. Contrary to popular belief, generators don’t create electricity. Instead, it uses the force of movement of the electric charges to produce an electric current, which then flows and we can use. These principles of physics have been around since the early 1930s (known as electromagnetic induction).

There are many parts to an electric generator, which include an engine, alternator, fuel system, voltage regulator, a cooling and exhaust system, and more. Electric generators are portable, so having the ability to produce energy anywhere you need it and then use the output for electrical power has enabled some of the largest construction projects to take place. Today, many industries rely on generators to power their machines while on location, including construction, road building, agriculture, mining, oil and gas, forestry, and so many more. Wagner Equipment Co offers generator rentals so you can have power in the remotest locations. Contact one of our Colorado, New Mexico, or west Texas Caterpillar dealers to get started today!

Another often needed piece of power systems that you need on job sites is an air compressor. Air compressors generate compressed air and holds it in a tank ready for use. Many pneumatic tools rely on compressed air for power. These tools speed up processes immeasurably for businesses and are vital for productivity. Plus, having the ability to fill up flat tires or tires that need a bit of air can make a huge difference in downtime and in fuel efficiency. Portable air compressors allow you to take these vital machines with you to wherever your job is located.

There is a lot that goes on in oil exploration, recovery, transmission, and refining. By its very nature, the oilfield work is out in fields, oceans, or other landforms that don’t have any access to electricity for miles on end. Having the ability to generate power for your needs is crucial to your oilfield service company’s success.

Wagner Equipment understands the unique needs of the oil and gas industry. We work closely with you to come up with a customer power system that will meet your needs. This can include engines, electric generators, enclosures, radiators, transmissions, transportation, controls, and more. We keep fuel efficiency and streamlined processes in mind when we design a power system for you. If you are looking for a custom power system for your oil and gas company, reach out to a Wagner Cat dealer in Colorado, New Mexico, and west Texas today!

Light towers are one of the most beloved of all power systems that we offer here at Wagner Equipment. After all, if you are working before sunrise or after sunset, you’ll need light to work by. Light towers are electric lamps mounted on a retractable pole and mast that is powered by a generator set. These generator sets are most often attached to wheels for easy portability. They come in many different sizes to suit your needs. In addition, light towers are popular power system rentals for one-off events and short-term use, such as for events, stadiums, or short-term industrial uses.

Wagner Equipment Co offers both light tower rentals and used light towers for sale to meet your needs. These extremely important pieces of equipment are easy to use and transport, and the amount of light they generate to see by is unsurpassed. Contact one of our Cat dealers if you are interested in a light tower rental today!

Oftentimes, you’ll need to pump water out of a hole, such as when you are digging for a huge construction project, for mining uses, or for municipality uses. These water pumps are used in construction dewatering, the oil and gas industry, in helping with drinking water supply and waste bypasses, and in mining. They can be utilized in natural disasters, such as during a hurricane or flood, and these water pumps can be used for sewer water as well. Godwin pumps can be used to move any type of liquid, including petroleum, juices, and even chocolate!

Godwin pumps offer high flow rates that speed up the removal of water or liquid considerably. Plus, this water pump is designed to allow for continuous operation, even with intermittent flows, without overheating. If you are interested in our Godwin pump selection, reach out to a Wagner Cat dealer with your questions today!

Harnessing electricity has to be one of humans’ greatest achievements. Our life would just not be possible today without the power electricity supplies to our machines. In addition, since electricity has begun to be widely available, the application of its use has exploded, yielding so many innovations that it would be impossible to list here. Wagner Equipment Co has focused on helping you with one small piece of those innovations: heavy equipment, tools, and the systems that ensure they work and last. With the best Cat parts and Caterpillar factory-trained technicians to deliver you stellar service and maintenance on these machines, we hope to help you make an impact in your corner of the world.

Get in touch with us. Just use the form below and we'll get back to you as soon as we can. Or if you prefer to chat live with a Wagner Equipment Co. Representative, just click the Live Chat button below.